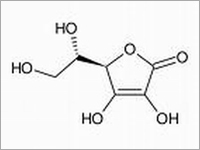 We are engaged in exporter of ascorbic acid, ascorbic acid molecule, ascorbic acid vitamin c. Vitamin C is the most popular vitamin known, and is consumed in several supplemental forms across the world. It is widely preferred for its antioxidant properties.

Ascorbic Acids Vitamin C or L-ascorbic acid is an essential nutrient for humans, a large number of higher primate species, a small number of other mammalian species (notably guinea pigs and bats), a few species of birds, and some fish. Ascorbate (an ion of ascorbic acid) is required for a range of essential metabolic reactions in all animals and plants. L-ascorbic acid is made internally by almost all organisms, humans being a notable exception. Deficiency in this vitamin causes scurvy in humans. Vitamin C is also widely used as a food additive. Ascorbic acid is well known for its antioxidant activity. Ascorbate acts as reducing agent to reverse oxidation in aqueous solution. When there are more free radicals (Reactive oxygen species) in the body versus antioxidant, human is under the condition called Oxidative stress. Vitamin C is the most widely taken dietary supplement. Vitamin C is available in many forms including caplets, tablets, capsules, drink mix packets, in multi-vitamin formulations, in multiple antioxidant formulations, and crystalline powder. Timed release versions are available, as are formulations containing bioflavonoids such as quercetin, hesperidin and rutin. Tablet and capsule sizes range from 25 mg to 1500 mg. Vitamin C (as ascorbic acid) crystals are typically available in bottles containing 300 g to 1 kg of powder (a teaspoon of vitamin C crystals equals 5,000 mg).

Other Products in 'Vitamins and Nutraceuticals' category